I got a request for a post on the spine labels I’ve done for my NAOMI GD-ROM’s. Never really thought anyone would be interested in them but wrong I was 😛

I use a Brother QL-570 label printer and design the labels in Brother’s P-touch Editor. It’s got an express mode and a pro mode. For doing your own designs Pro mode is preferred. The GD-ROM spine measures 184 mm x 12 mm (H x W). Even though there is a 12 mm wide roll I use a 29 mm wide roll for printing the GD-ROM spine labels. The reason being that the QL-570 wants a bit of margins on all sides. For this reason I’ve also made the label 187 mm long.

Here are a few image files for getting started. I’ve picked them all from the Intertubes and I don’t make any claims as to owning any of these.

I’m ending this year with a few doujin shmups and other shmup related items. 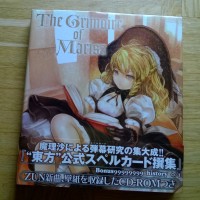 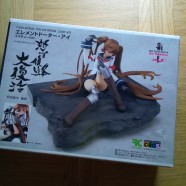 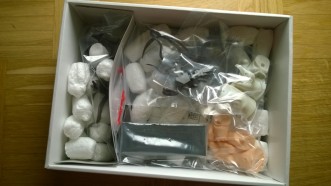 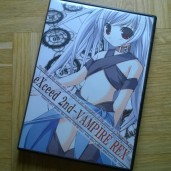 The only non-shooter game by Cave released on the CAVE CV1000 hardware. It is also the only Cave release to have a song playing during attract mode.

This is the Namco version of Dig Dug, released in 1982. It uses the same pin-out as Galaga. Still waiting for a JAMMA converter so I can take the game for a spin. 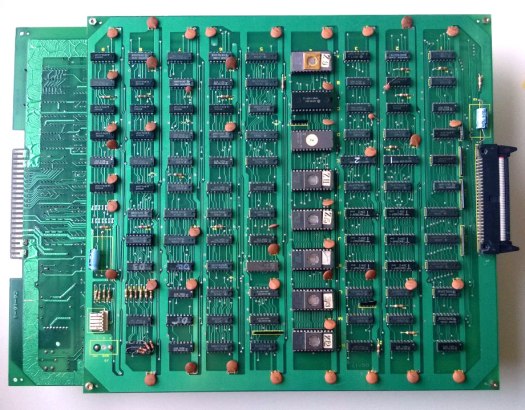 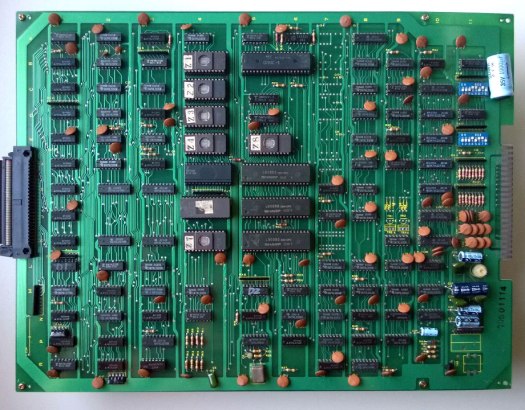 Arcana Heart was first released in 2006 by Yuki Enterprise. Later in 2007 after Examu had acquired Yuki a patch called Arcana Heart FULL! was released adding more characters to the roster.

Arcana Heart equipped with the FULL! upgrade and the original version to the left. The pin-out on the PCB is JAMMA but video out is only by VGA. As far as I know this is the only PCB based game with this combo.

Released in 2001 by Sega for the Naomi system, Cosmic Smash is a combination of squash and break-out. 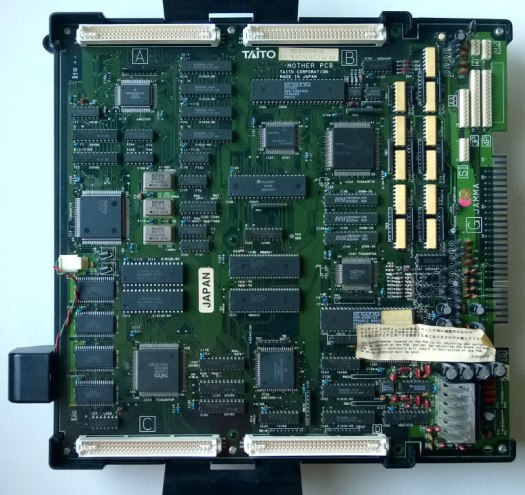 We’re a week away from Japan Amusement Expo 2014 and the four big ones have already released most of their line ups for the show and while there’s not anything notably new one can just hope that at least one of them has a hidden ace up their sleeve.

First up is Sega

Sega will be showing off a couple of new games. New, in the sense that they’re not released yet. In another way not so new, since most of them are already on location tests and already known to the public.

As always most of them won’t be available anywhere near Europe, except for perhaps Dead or Alive – making its arcade comeback – and Guilty Gear Xrd. I’d love to try both the new Initial D and the super trippy mai mai GreeN music game (check the video clip further down!).

An arcade version of the Nintendo 3DS RPG with the same name. You play as Kaito Gosho, a young boy with serious money problems, forced to participate in a virtual fight tournament in order to repay his debts. The money you win can also be used to perform actions during the battles. Hero bank arcade is scheduled for release this summer. 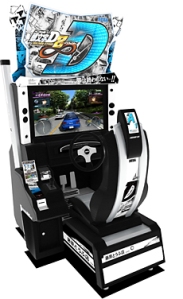 The next installment of the Initial D franchise has the appropriate name Infinity. According to the press release it goes back to Shuichi Shigeno’s original world of the Initial D manga. You’re faced with a single player career mode where you race upgrade your ride. D coins can be used to purchase special parts. To save you progress you’ll need an ALL.Net IC card. Initial D ARCADE STAGE 8 Infinity is scheduled for operation sometime this year.

It’s been 13 years since we last saw 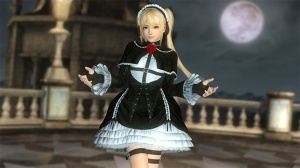 Marie Rose will be made available to the console versions of the game in an upcoming patch. DoA 5 Ultimate Arcade runs on Sega’s RingEdge 2 system with support for the ALL.Net P-ras MULTI Ver.2 system.

Guilty Gear is back in full cel shaded 2D glory using Unreal Engine 3. According to rumors it will be released later this month for the arcades and sometime this year both for PlayStation 3 & 4.

Development is once again done by Arc System Works and the series creator, Daisuke Ishiwatari, is back in the director’s chair.

New in this version is the character Bedman.

Final location testing is currently ongoing and like it’s predecessor GGXrd will be released on Sega’s RingEdge 2 arcade board with support for the ALL.Net P-ras MULTI Ver.2 system. 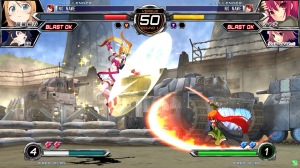 Dengeki Bunko Fighting Climax is a 2D fighting game collaboration between Sega and Dengeki Bunko scheduled for release in March this year. 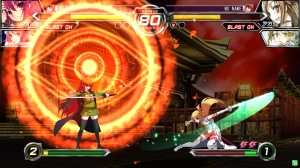 The game features characters from different light novel series under the Dengeki Bunko imprint. Each playable character has its own assist character that can be called into the fight to help in various ways.

All characters are voiced by their respective actors from the anime adaptations. Akria Yuki of Virtua Fighter is confirmed as one of the bosses.

Puyo Puyo! Quest Arcade is an RPG spin off of the populat Puyo Puyo! franchise. The game was released in November last year and seems to be getting a good deal of plays.

mai mai GreeN is a fast paced crazy music game where you have to hit and swipe on a touch screen to the beat of the music. The updated version (mai mai GreeN PLUS) scheduled sometime this spring will be available for play on the expo. Level: ASIAN!

THE WORLD of THREE KINGDOMS

The World of Three Kingdoms is an epic scale real time battle game set in the Chinese Sangokushi era. You command your troops using buttons and touch screen.

You can battle out against the CPU or other players and as all other Sangokushi style battle games the cabinets are beautiful though in the case of TWOTK they’re combined four and four in a half circle with an integrated live monitor instead of rows of free standing cabs.

In my previous attempt on an HD cabinet I was planning on using an Atomiswave SD cabinet. This proved to have more than one drawback. It could only house a 26″ monitor and the tilt of the screen was too large for providing a decent viewing angle. In the Naomi/New Net City we can squeeze in a 27″ wide screen monitor (which is much easier to come by) and it’s also more upright and since viewing angles are an issue with LCD/LED monitors this is preferred. Apart from the usual criteria when selecting a monitor; low input lag and response time, we also had the following:

The big issue of course was how to know what the panels looked like on the inside without taking them apart? Luckily an acquaintance works for a company repairing monitors and he was able to help us in our search. In the end we let go of the fast format switching and decided on a Philips 273E3LHSB. 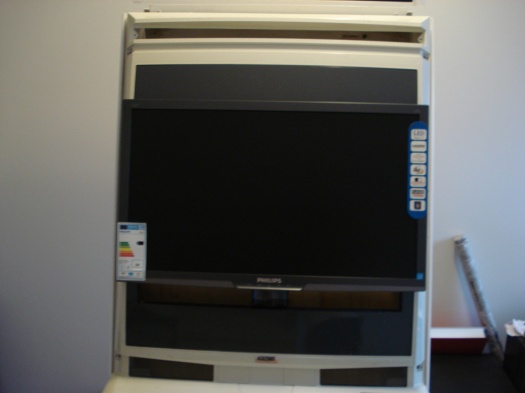 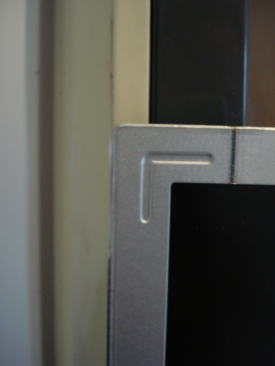 Philips 273E3LHSB – back with VESA mount

Cutting away on the front cover 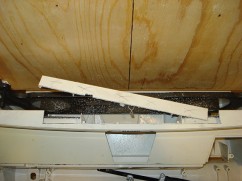 Making room for rotating the monitor

Part of the front cover also had to go for allowing space for the monitor.

To test the mounting and rotation I used a plywood board I had lying around. There’s plenty of space between the back and the front cover and I ended up constructing a riser for the monitor mount. I feared the monitor would become wobbly but no. It sits sturdily behind the front cover. There’s enough room around the monitor for housing the front, center and surround speakers without getting in the way when rotating the monitor. Speaking of the speakers…at the moment we’re looking at the Logitech Z-906 system. Plenty of good sound and the satellites are small enough. Only issue is how to house the sub-woofer. But more on that later. 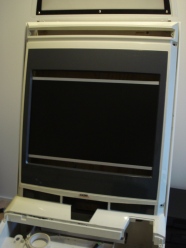 Yoko with bezel before cutting it up

Tate with bezel before cutting it up

Tate without the front cover

Tate after sawing the bezel

A bit of fighting action

Next up: a new lamp cover.

Originally developed by the dōjin circle SUBTLE STYLE for Microsoft Windows in April 2007. The title earned reputation both in Japan and elsewhere for its high-resolution sprites and older style gameplay.

Later on in 2007 Arcadia Magazine confirmed that the game would be launched for the arcade. The arcade version was called Akatsuki Blitzkampf Ausf. Achse and was released in February 2008 for the Sega NAOMI system.

Akatsuki Blitzkampf is set in a fictional future with many characters borrowing visual style from German soldiers of the World War II era. Many of the characters in Blitzkampf previously appeared in an earlier game, Akatsuki Shisei Ichigō, also by SUBTLE STYLE, released in 2003. In-game visuals supplement this sort of specific militaristic theme and environment, portrayed by the flat and somewhat cubist character portraits and story sequence images.

The game play is considered somewhat old-school in comparison to other dōjin fighter games of the time, relying more on parrying, space control and footwork than chaining combos and heavy aerial combat. 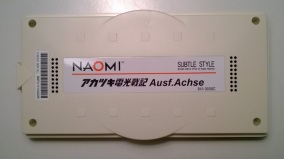 Our plan is to make a sit-down cabinet, much like the New Net City. So the first step in order to get a feeling for the profile of the finished cabinet was to cut the legs down.

With the legs in place it was time to get a glimpse of the future. Since my donor cabinet used to be a Wild Riders I had to find both a control panel surround and bucket. Luckily Johan, who sold me the cab, also had a surround and moshpit over at AO had a spare bucket lying around – et voilà – meet the Net City HD – the WIP version 😉 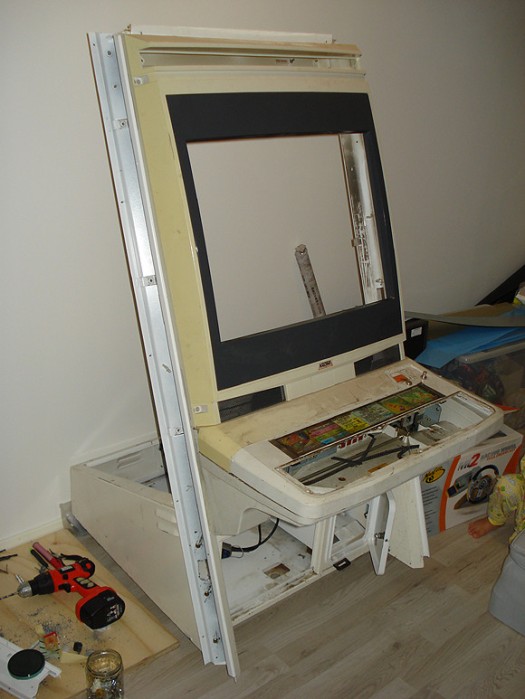 Stompp and I have been throwing ideas back and forth for a long time. This is one of the mock-ups we’re working on at the moment.

Base color of the cab is going to be gun metal gray, the bezel will be modified to fit a 27″ wide screen LED monitor and get covered with a carbon fiber vinyl (looks awesome and will be much easier to apply than an A-grade paint job).

The notch between the bezel and the surround speakers will get a new lamp cover and house a blue LED strip.

Next up: the monitor